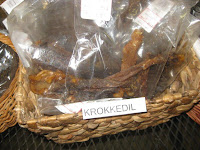 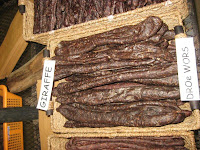 Recently, a colleague of my husband traveled on business to Botswana Africa where he had the opportunity to eat a traditional South African dried meat called “Biltong”. Rooibok (kangaroo and Ibok) , Krokkedil (crocodile) Giraffe, Hippo and Kudu; were all on the menu, add to that a bit of lion meat and dinner was served. 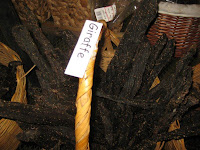 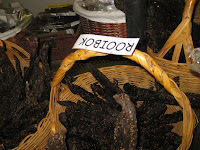 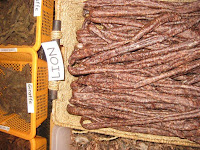 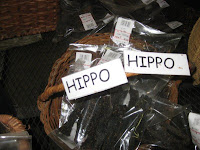 The Dutch settlers who arrived in South Africa in the 17th century brought recipes for dried meat from Europe. Many different types of meat are used to produce it, ranging from beef through game meats to fillets of ostrich from commercial farms. It is typically made from raw fillets of meat cut into strips following the grain of the muscle, or flat pieces sliced across the grain. It is similar to beef jerky in that they are both spiced, dried meats, but differ in their typical ingredients, taste and production process. The word biltong is from the Dutch bil ("rump") and tong ("strip" or "tongue").[1]

The word “game” is used loosely in the Wikipedia definition of Biltong, as well as most other sources defining and illustrating Biltong. This is where my personal experience meets Biltong for the first time and when my inner voice beckons to be heard.

I have no issues with most of the meats used to make Biltong but when faced with the offer to eat Biltong made with lion meat, I was filled a strange queasy feeling and believed that I might be committing an unpardonable sin. From that moment I’ve been grappling with this question; where do I draw the line when it comes to eating animal meat?

The non-meat eaters of this world have already taken a stand on this issue and have drawn the line for themselves when it comes to eating warm blooded creatures. I have many Vegan and Vegetarian friends who have challenged me about being a carnivore. After many heated discussions, I’ve often pondered my abilities to eat Gods creatures so easily. Don’t get me wrong, I’m a true carnivore. I love all manner of meats and have even been known to eat beef and fowl livers as well as hearts and gizzards, raw fish and the list goes on and on. My inner voice has always brought me back to the same answer; God gave us certain creatures to sustain our hunger and feed the population and some creatures to nourish our souls with love and companionship. Without regret and satisfied with my belief, I’ve cooked and eaten animal meat with flair and gusto and have loved my pets with the same passion as the meat I eat.

How is it that I will eat all manner of meat without flinching and when given the opportunity to eat Biltong made with lion meat I was stopped dead in my tracks?

We’ve all seen travel and cooking shows such as Andrew Zimmern’s Bizzare Foods and Anthony Bourdain’s No reservations, where the consumption of exotic and strange foods are embraced. As far as I can see, neither of these gentlemen are filled with guilt or ravaged by shame after eating myriads of bugs, worms, or five thousand year old baby chickens. Lips smacking and finger licking good, they both are paid the big bucks to explore the extraordinary.

Customs, social morays, cultural diversity, are the makings of our attitudes toward what we’re willing to put in our mouths and call food! I don’t believe we can judge or force our beliefs on others unless we base our judgments on mitigating facts. I hoped to find the mitigating facts about the legitimacy of eating lion meat to quell my guilt, so off to the World Wide Web to find some answers.

1. Are lions on the endangered species list? The African lion (Panthera leo) has been listed as Vulnerable since 2004, since it's wild population has declined by 30% to 50% in the last 20 years. "Vulnerable" means that there's a good chance that it will become endangered if the population keeps trending the way it is now, but it's not endangered yet. However, there are some lions for certain regions that are endangered.

2. Is it illegal to hunt and eat lion meat? The African lion (panthera leo) is protected under Appendix II, which allows commercial trade as long as it does not harm a species' survival.2

With my curiosity overflowing and armed with the knowledge that lions are not “yet” endangered, I accepted the offer to try a piece of Lion Meat, Biltong; a haunting voice filled my head as I lifted the meat to my mouth…”NO Reservation” ...Anthony…get out of my head!!! 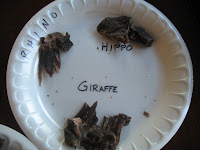 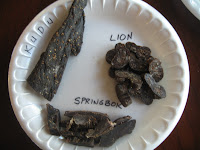 I started first with the Giraffe, then the Roobok, Hippo and Kudo. They all tasted similar to our American version of beef jerky but the Giraffe was tough and dry. The Kudo, Roobok and Hippo were moister and the textures were similar to a steak that had been dried in the sun. I didn’t detect any gaminess in any of these varieties.

I saved the lion Bilton for last. It was marbled with pieces of fat and shimmered with oil when sliced, it smelled of earthiness, an almost herbal quality. It was delicious! The texture was oily but full in herbal flavors. The meat tasted similar to elk, with the same distinct dark red color.

Unfortunately or fortunately, depending on your personal views, I was unable to finish my piece of dried lion meat, as thoughts of the majestic beast rumbled around in my brain.

Fellow carnivores, where do you draw the line when eating exotic animal flesh? I would love to hear you thoughts and opinions…please be gentle with me!!!

« Contest: How do you dress-up your greens? Fresh Peach Vinaigrette
Icelandic Yogurt Review and Giveaway from Siggi's Skyr »