PRIZE: Five Finalists will compete in May 2019 in Napa, CA for 25,000.00 UPDATE: All-inclusive trip to Napa for two, flights, hotel, and 200.00 gift card. I did not win however, the experience and event were priceless.

"Now that Rebecka Evans has tasted victory as a “competitive cook,” she wants another helping.

This summer, Pearland’s “self-taught, stay-at-home-mom food blogger” is perfecting several new culinary delights, such as a bacon-bourbon cupcake, in hopes of retaining her title as the world bacon champion.

“The pressure is on,” said Evans, as other contestants “are coming for me.”

The cupcake, which features candy bourbon bacon and vanilla pastry cream, “is in the infant stages of recipe creation,” said Evans. “It is one of the recipes I'm working on for World Food Championship 2018,” a contest set for Nov. 7-12 in Orange Beach, Alabama." By Don Maines Published 3:30 pm, Thursday, June 28, 2018 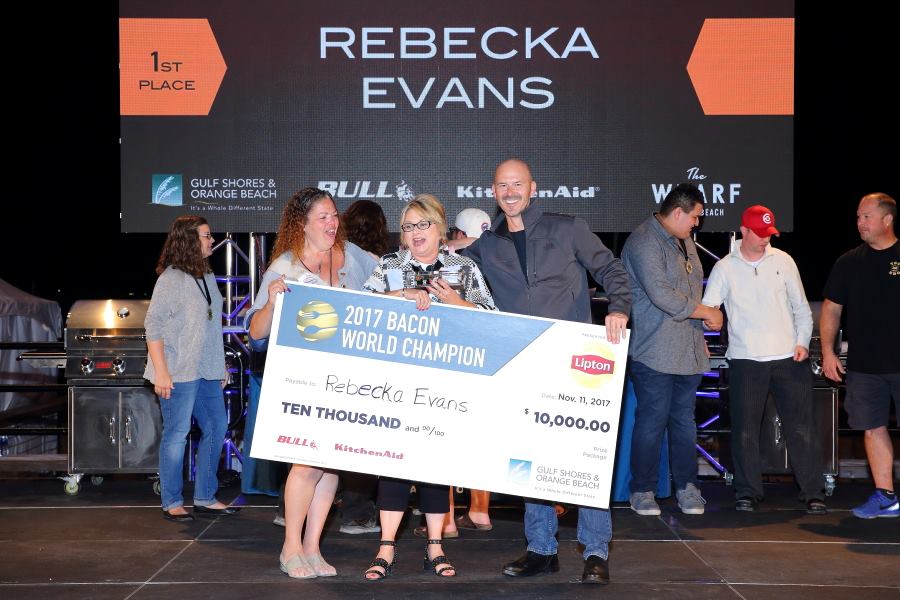 Can bacon be Pearland cook's ticket to win $100 grand?

Rebecka Evans of Pearland hopes to "bring home the bacon" by beating nine other finalists to win the $100,000 top prize as the 2018 World Food Champion at an April cookoff.

In November, the "self-taught, stay-at-home mom, food blogger and competitive cook" scored a golden ticket to the ultimate cooking contest by winning the 2017 World Bacon Champion title and $10,000 for her Dutch Crunch Baby Pancakes. READ MORE...

NASHVILLE – No one would have blamed Rebecka Evans for cooking while distracted at the Blogger Summit that was part of the 2015 World Food Championships.

After all, a new grandson had just entered her world (her first after four granddaughters), and Blogger Summit planners were a little worried that the new little guy who stole her heart might detour her trip to Florida to not only attend the event as a blogger, but also to compete in the Bacon World Championship.

But there she was, part of the cadre of online food writers from points around the globe who came to get an up-close look behind the scenes of Food Sport’s largest event.

Little did Rebecka know she would find herself on the stage at WFC’s opening event/welcome party accepting the first place award in WFC’s first-ever Blogger Summit Challenge...READ MORE

PLACED: 4th in the World

PRIZE: Featured Dessert of the Week

I had the pleasure of hosting the live cooking event, Cooking Across America-Colorado Cooks in my home this Spring. The event was attended by ladies who have met through the RWOP web site. In an effort to connect with fellow RWOP'ers in our part of the country, Claudia Signal Leon put in motion this amazing event. Spanning several months and cities, we all got together to share some time in the