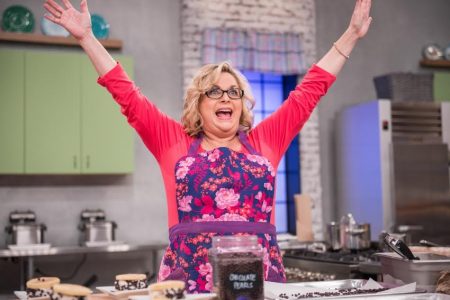 I'm happy to say that my Food Network debut went better that I could have ever expected. Four grandams battled it out on Food Networks new Holiday series "Clash of the Grandmas" and I took home the First Place win and 10K Grand Prize with my Mexican Biscochito Cookie with Cinnamon Tequila Ice cream Sandwich. 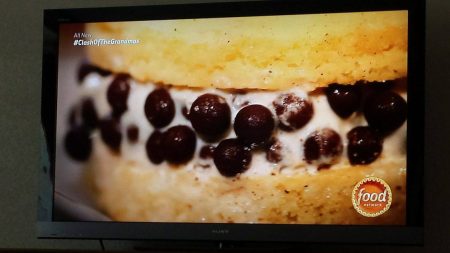 If you would've told me a year ago that I would be a competitor on Food Network's "Clash of the Grandmas" I would have laughed. It's been months since I filmed the show and even after winning, I'm still pinching myself in disbelief that it ever really happened.

You may be wondering what it takes for a grandma like me to be a part of Food Network and win 10K. The first hurdle is to make the conscious decision to put yourself out there and audition for the show.  Honestly, I think this is the most difficult decision in the entire process. So many thoughts run through your head as you think about your ability to compete under such stressful circumstances. "Do I have what it takes?" "Can I finish my recipes on time?" "What will I look like on TV?" After working through the anxiety, my competitive nature takes over and I jump headlong into the process.

The next step: Contestants are required to fill out a very long written application, send in head shots, photos and videos of their food, and family, all in hopes of being chosen. After that...the waiting begins. I was surprised when I got a phone call that evening from a talent scout at Triage Entertainment. She introduced herself as a representative from Food Network and told me she was submitting my application to the producers for Clash of the Grandmas! I was ecstatic of course, as I did a little happy dance and maybe even shed a few happy tears. Unfortunately, getting picked for the show doesn't come that easy, this was just the first step in a very long process.

I spoke to several different producers over the next three weeks; they loved me, but every conversation ended with "You look too young to be on the show." How am I  supposed to respond to that? I took the news as a compliment, but felt that my grandma status was being overshadowed by an old perception of what grandmas should look like. I guess I'm not your "typical" grandma, but I have a true grandmothers heart. I proudly earned grandma status six years ago with the birth of our first granddaughter, Amber. Since then, we've welcomed three more granddaughters: Alexis, Annalee, Norah. We have also welcomed one grandson, Owen into our lives.  They are all precious human beings, that I adore. After speaking to producers throughout the process, I thought my chances of being picked for Food Network's "Clash of the Grandmas" we're slim to none!

After waiting several more weeks and going through more interviews, I finally got the coveted final-cut Skype interview! It was my moment to shine, so I prepared several of my favorite recipes for the producers that day. A few weeks later I got the call and they said yes!  The next step sign a contract with Food Network.

Crunch time: After all that waiting and hoping, emails and phone calls started to roll in and didn't slow down until my hotel reservations were booked, my flight was booked, and I was on my way to Universal Studios in Los Angeles. Did I mention my hubby got to travel with me? Food Network asked my husband to join me so they could interview him about my cooking skills during the filming of my episode. However, I had a suspicion they might use him for more than just an interview. 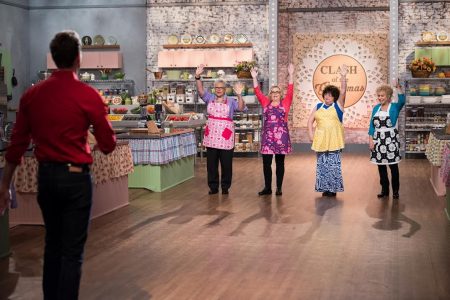 After arriving at the studio, I met the other grandmas. Robin Daumit (Annapolis, Maryland), Cleo Johnson (Houston, Texas), Barbara Mayo (Colliersville, Tennessee). We all took a minute to size each other up while the crew got us into our granny aprons, fixed our makeup and fluffed our hair. It didn't take long for us to realize how much fun it was going be together on the set the Clash of the Grandmas. These beautiful ladies were talented cooks with big personalities, so I knew I had my work cut out for me. Although we were all there to win, it was obvious that each grandmother wanted to represent their families and grandchildren in the best way possible and none of these grandmas we're going to throw anyone under the bus.

Finally, with a lot of tenacity and focus mixed with prayers and supplication, I walked into my first television competition without any knowledge of what to expect. It was nerve-racking, amazing, and wonderful.

Food Network's Clash of the Grandmas 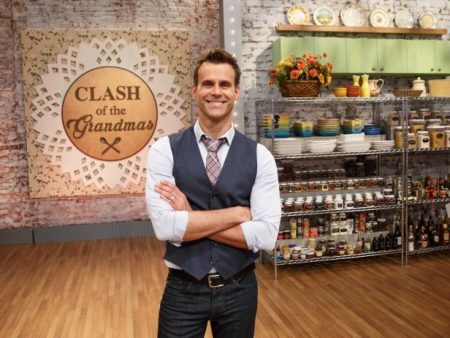 Cameron Mathison Emmy-nominated actor and television host is the co-anchor of the most-watched entertainment news program in the world, Entertainment Tonight. Photo courteous of Food Network

The Food Network made the experience shine with our host, Cameron Mathison.  His kindness and fun personality put us all at ease. Not to mention, he's one good looking man. He treated us grannies with respect and dignity but he didn't go easy on us when it came to the competition.

First, the four grannies create handheld versions of mac and cheese to hold the family over until dinner."

I was sure I'd be sent home the first round after I created and hand-held mac & cheese taco with tequila dipping sauce. I was struggling with the size of my pasta being too big to fit the taco shell just as my tequila sauce burned. I had to make another sauce without having the opportunity to taste it before Cameron announced the cooking time was up. Thank goodness the judges, Eddie Jackson, Brandi Milloy, and Jamika Pessoa liked my dish well enough to send me to the second round. It was great to have some positive feedback heading into the second round.

Next, they have only 30 minutes to make meatloaf for unexpected guests, with the help of unexpected sous chefs: the grandpas!"  FULL VIDEO HERE 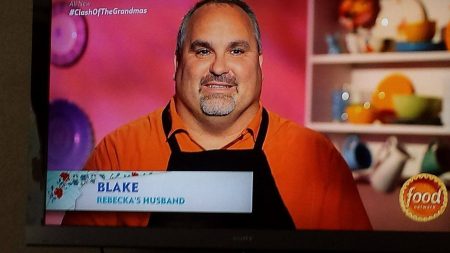 I was happy to hear meatloaf dinner was our challenge for the next round and felt very confident until Cameron announced he had a surprise group of sous chefs waiting in the wings. Our husbands walked onto the set and there was my man wearing an apron! I suspected something like this might happen when Food Network asked that he travel with me to the show. By the looks on their faces, the other grandmas were really in shock, however due to the fact I know my husband's picky palate and that we work well together, I was not as overwhelmed. I made my Blackberry Hoisin Meatloaf with Roasted Potatoes and Asparagus.  I put Blake in charge of making the potatoes while I focused on the meatloaf. He was the perfect sous and assisted me so well, I made it to the final round.

Then, the final two grandmas try to freeze out the competition by producing an ice cream sandwich worthy of the $10,000 prize using liquid nitrogen." 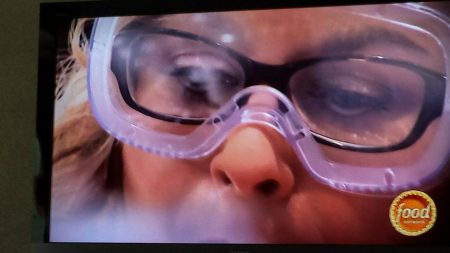 Making it to the final round was beyond my comprehension. I was competing for $10,000 and I was also about to experience cooking with liquid nitrogen for the first time in my life. I was exhilarated about the opportunity to get my hands on the liquid nitrogen and found myself feeling like a kid in a candy store. Gloves check, goggles check, liquid nitrogen check! I was having so much fun with the liquid nitrogen, I got carried away and over froze my ice cream. I had to warm it up bit in the oven to release it from the sides of the mixing bowl. Despite that one set-back, my last recipe went off without a hitch and the judges loved it. 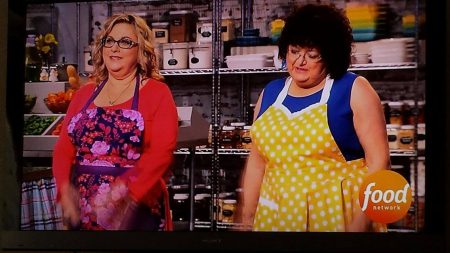 Clash of the Grandmas - the winner is...

The final decision with my competitor Barbara Mayo.  We both stood hopeful to be the top winner and yet thrilled for the other grandma if she wins. There's nothing better than true camaraderie between competitors. Barbara created a delicious goat cheese and basil ice cream sandwich with lemon cookies. I got the chance to taste the ice cream before we went to the judging table. The flavors were delicious and creamy and by any account, a winning dish. I believed it would be her name they called in the final moment; yet however, with Gods good favor,  fate, or just plain good cooking, Cameron announced me as the winner. 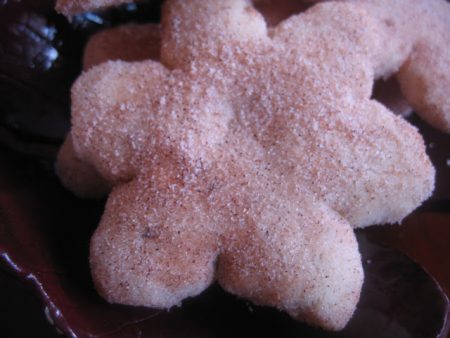 Biscochitos -Mexican Sugar Cookies are a Holiday tradition in my family. The are a crispy butter or lard based cookie flavored with anise and cinnamon. It was developed by residents of New Mexico over the centuries from the first Spanish colonists of New Mexico.

The recipe for making the cookie has been greatly influenced not only by local and indigenous customs, but also by recipes brought to New Mexico by immigrants from other Hispanic countries. It is served during special celebrations, such as wedding receptions, baptisms, and religious holidays (especially during the Christmas season).  Source: Wikipedia

You can find my family recipe for Mexican Biscochito cookies posted on At Home with Rebecka  December 2010 HERE. Due to my contract with the network, I'm unable to share the full recipe for my winning ice cream sandwich. You can make your own version using store-bought ice cream as the filling. It may not be exactly the same as on the show but I can guarantee they will be delicious.

Clash of the Grandmas video links and memorable moments

Clash of the Grandmas Schedule and air dates

Tune in for the final episode of Clash of the Grandmas and watch my friend Ally Phillips in "Grandmas World Tour" Sun, December 18, 10|9c Read more at: