Hope you enjoy one of my favorite old posts. Have a great day!!

I think I was born a fisher-woman mostly because my three older brothers held no interest in the sport. I became my dad’s little fishing buddy at the ripe old age of two. My memories of fishing with family are filled with food, fun and loads of fish tales however, a few outings stand out in my mind like they happened just yesterday.

On any given summer evening, before a weekend fishing trip, you could find my three brothers and me standing in the lush street medians between, Wood and Cascade Streets in downtown Colorado Springs.  Armed with our flashlights and various worm containers, we would comb through the manure laden soil for a host of plump nightcrawlers.

As with any hunter, I'd done my research before heading out to capture the elusive nightcrawler! After years of hands-on field experience, I found that the soil was darker and richer, the closer you got to the mountains unlike the clay soil where we lived further east of town. Thus, the soil closer to the downtown area bred bigger and better nightcrawlers.

The aroma of fresh clipped grass filled our heads with its green scented blades, and the musty earth squished up around our shoes.  Giddy with anticipation, we knew that the black, rich soil would bring forth hundreds of fat, juicy nightcrawlers.  Stealthily, we would move among the trees and bushes shining our flashlights just in time to glimpse our prey! Almost, without breathing and in a lightning move, we would dive to the ground and grab whatever part of the unassuming worm that lay basking in the moonlight; often times coming up empty-handed or with half or a quarter of the creature. Hunting nightcrawlers was endless fun!

One thing to note about nightcrawlers...although they have especially tiny brains they are pretty smart when it comes to not being captured! Smooth and fast, a nightcrawler is back in his muddy home in nothing flat. You have to be patient and cunning to bring home a bucket full of these wiggle worms.

Interesting fact: Nightcrawlers are able to regenerate themselves if torn in half, much like their cousins the common earthworm. Now, wouldn't that be an awesome special talent to have? The good news, fish are not picky when it comes to eating half or whole worms!

I believe fishing is the sum of its many perfect parts! Nightcrawler hunting is only the beginning of the beautiful cycle.  There’s learning how to bait a hook with those gigantic worms. Endless hours of practice casting without hooking oneself, or the trees, or your brothers, and then finally, mastering the patience to wait long enough for the fish to strike. Of course, our parents taught us that whatever we caught, or hunted and killed, must be gutted, cooked and eaten. At that point the sum of the parts became whole; pan-fried trout by the campfire. You see, all my favorite memories lead me right back to food!!

One hot summer my family got together with cousins, aunts and uncles to do some much-loved fishing for Brown and Cutthroat Trout. Our favorite place to catch these beauties was in the San Juan River in New Mexico. Miles and miles of quality water teaming with 8 -15 pound trout was our playground. 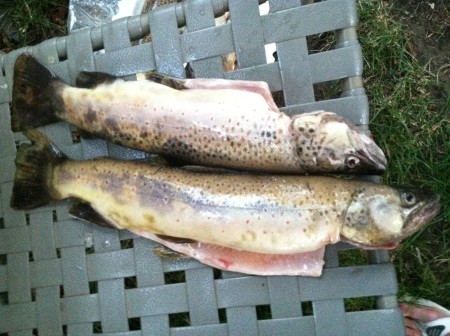 A delicious dinner awaited us after a day spent in the sun; our coolers always full to the brim even after eating our share at the campsite. Packed in ice chests for the ride home, the rest was either frozen or smoked for later consumption.

It was dusk as we made our way down the fifteen mile river. As we walked the winding path for some much anticipated night fishing we began planning our evening meal. My cousin mentioned this area was especially good for frog-gigging so we decided to add frog legs to our dinner of pan-fried trout. I've cooked and eaten frogs legs but had never gigged for them until that night. Luckily, my cousin’s son, Shane was a master "frog gig-ger". Our decision to eat frog legs for dinner has burned this particular memory into my mind forever.

I was in my early twenties and wearing my famous fishing attire; camouflaged pants, green cotton top, brown leather work boots, and a straw hat. Shane was six years old, wearing a giant cowboy hat that dwarfed his tiny body, stomping around in his pointed cowboy boots and tossing rocks into the river, regularly, being scolded by his father to stop it before he scared off all the fish! Shane spoke with a strong Southern drawl, so pronounced at his tender age that words like grandaddy sounded much more like grin-deeddy. His sweet hearted demeanor and funny antics were infectious and I found myself giggling often.

Shane was so excited to teach me how "real frog gig-gin", was done. It was dusk when he finally took me by the hand and led me to a brackish pond just a few hundred yards from our deep blue fishing hole. As we approached the pond we could hear a chorus of croaking sounds. The voices of hundreds of frogs gathered together for a night full of insect-eating and whatever else frogs do in the wild.

I tied a fly to my fishing line while there was still some sunlight, and waited while Shane found the perfect spot. Shane flipped his miniature rod like the seasoned master and deftly caught his first green frog. He said, "Seeee...dat's haow it’s done." I followed suit and together we bagged about thirty slippery frogs.

We continued bagging our foggy friends with gusto, and oddly enough, just when I gigged my twenty-fifth, I started taking notice of how cute their big brown eyes were and how lovely a shade of green their skin. Something ominous began to nag at the back of my mind.

I've never been the queasy type, but watching the sack full of writhing frogs, wriggle around on the bed of the truck sent a fast shiver up my spine!  I've killed and cleaned many fish but never a frog.  On the ride back to our camp it occurred to me that someone was going to have to kill the frogs before I could cook them, and I really didn't want that person to be me!!

It was dark by the time we got back to camp so my cousins got the fire going and left the frog killing up to me, and this very deft six-year-old boy….Really?  It was a surreal moment as I watch this tiny four-foot, six-year-old boy, heft the heavy laden bag of frogs from the truck and carry it to the front bumper of the truck where the head lights shone brightly. I saw his tiny arm shoot up and motion me over to where he was kneeling. Stooping down next to him, he looked me square in the eye, and with a sweet southern drawl said, "Dis is haow ya kill dem der frogs!" At that moment, I think I swooned a little.

I stood there mesmerized as he reached into the bag and pulled out a plump green frog. He grabbed the frog by both its back legs, swung his arm behind his back like he was about to throw a fastball, and slammed the head of the frog onto the bumper of the truck!

I got a lot dizzy and found myself looking for a place to sit down. Shane then calmly stated, "Now dats haow ya kill dem der frogs, wanna do some?" In a weak voice, I declined his invitation. I told him that he was doing a fine job of it, and to please feel free to continue while I got the rest of dinner started.

For what seemed like a millennium, he repeated this process until all the frogs lay dead waiting to be skinned and cooked.  Needless to say, I cooked "dem der frogs", but didn't eat one!

Next weeks post...maybe I'll make you some frogs legs? Until then here's a recipe from the Food Network