Polish Zapiekanka is an open-face sandwich with sautéed white mushrooms and cheese, toasted until the cheese melts. Served hot with ketchup, it is a popular street food in Poland.

The Submission Window is now OPEN for the Saucy Mama's 2016 Recipe Contest. Hosted by Barhyte foods a PREFERRED QUALIFYING EVENT for the World Food Championships.

Pendleton, Ore. (March 3, 2016)- Barhyte Specialty Foods is excited to announce the creation of “Team Saucy Mama”, which will be competing at the 2016 World Food Championships (WFC) in November in Orange Beach, Alabama. The team is made up of some of the most extraordinary home cooks in the US, and each one is striving to compete in the Final Table at WFC, where one person is crowned World Food Champion and receives a $100,000 grand prize.

Saucy Mama has offered three competitor spots on the team. Two of these spots are already claimed, as last year’s WFC Saucy Mama competitors earned their way to the Top 10 round and were prequalified to compete again this year.

Only one spot remains on Team Saucy Mama with 25 of the Sauciest home-cooks are vying for coveted LAST SPOT!

Thank you TEAM SAUCY MAMA for choosing me as one of the 25 to compete for the LAST SPOT!!!

So what does the Saucy Mama Recipe Contest champion win?

Most importantly...a First Place win with Team Saucy Mama offers home-cooks like myself, the ability to vie for cash prize(s) to offset the cost associated with Food Sport. Thank goodness for Sponsors that offer WFC Preferred Qualifier Contests!!

In addition to competing for a place on Team Saucy Mama, Team Just A Pinch has invited me to return to represent them at the 2016 Bacon World Food Championships, in Orange Beach, AL.  They have offered to pay my entry fees as a result of my 4th place win in last years competition ($300.00). Thank you Just A Pinch!! Since I'm competing in the Bacon Category again this November, you'll notice a BACON recipe theme throughout all of my WFC Contest recipe submissions. 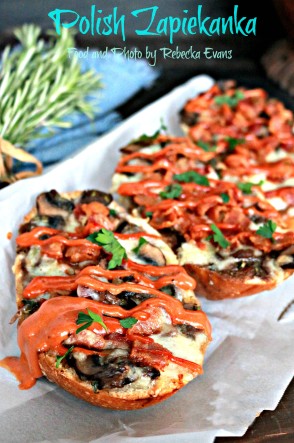 My first recipe submission for the coveted LAST SPOT on Team Saucy Mama...

A zapiekanka (Polish pronunciation: [zapʲɛˈkaŋka]; plural: zapiekanki, pronounced [zapʲɛˈkaŋkʲi]) is an open-face sandwich made of half of a baguette or other long roll of bread, topped with sautéed white mushrooms, cheese and sometimes other ingredients, and toasted until the cheese melts. Served hot with ketchup, it is a popular street food in Poland. With its origin dating back to the 1970s, the zapiekanka is associated with the austere times of Poland's Communist regime, but it has enjoyed renewed demand in the 21st century, which has also brought a wider range of varieties. SOURCE: From Wikipedia, the free encyclopedia

This SUPER-SAUCY sandwich showcases two delicious Saucy Mama products and a heap of crispy smoked BACON!  My family loved testing this meal and it's become a regular on our weekly family menu. The versatility of the dish is what makes it so appealing for family dinners, and parties. Zapiekanka is like pizza in that, the toppings can be adjusted to fit your mood. All veggie Zapiekanka, or all meat style...it's entirely up to you.

The Spicy Ketchup made with Saucy Mama's ALL NATURAL Cracked Pepper Marinade  is fiery and sweet; the cracked black pepper mixed with sweet ketchup and mayonnaise makes the sandwich sing in your mouth! The mushrooms get the "Saucy Mama treatment" too, with a big helping of the Champagne Honey Mustard (my new favorite SM mustard to date).

This delicious and historical Polish street food sandwich, is elevated to restaurant quality meal with the addition of Saucy Mama's All Natural Mustard's and Marinades!! 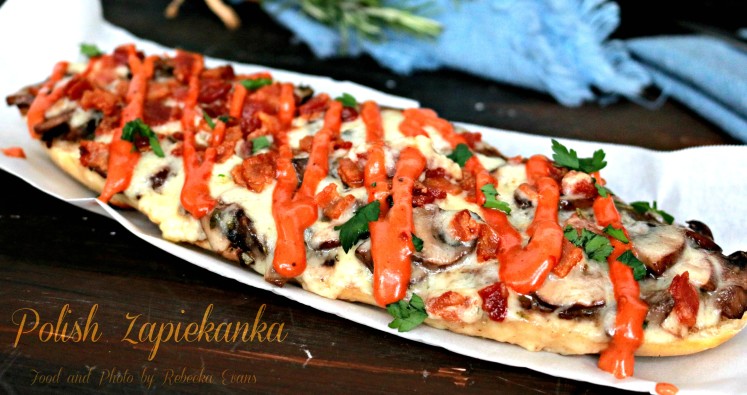 To prepare the mushroom base

To prepare the Zapiekanka

This recipe is just a versatile as pizza! Try adding your favorite ingredients to make delicious new combinations of Zapiekanka. Adapted from Polish Street Food
Tried this recipe?Mention @athomewithrebecka or tag #athomewithrebecka!
« Jibarito (hee-bah-ree-to) with Flatiron Steak, Bacon Jam and Spicy Hot Sauce Sandwich-RECIPE #2
Do you have what it takes to win Battle Sandwich? Hosted by At Home with Rebecka & Barhyte Specialty Foods - WINNER ANNOUNCED »