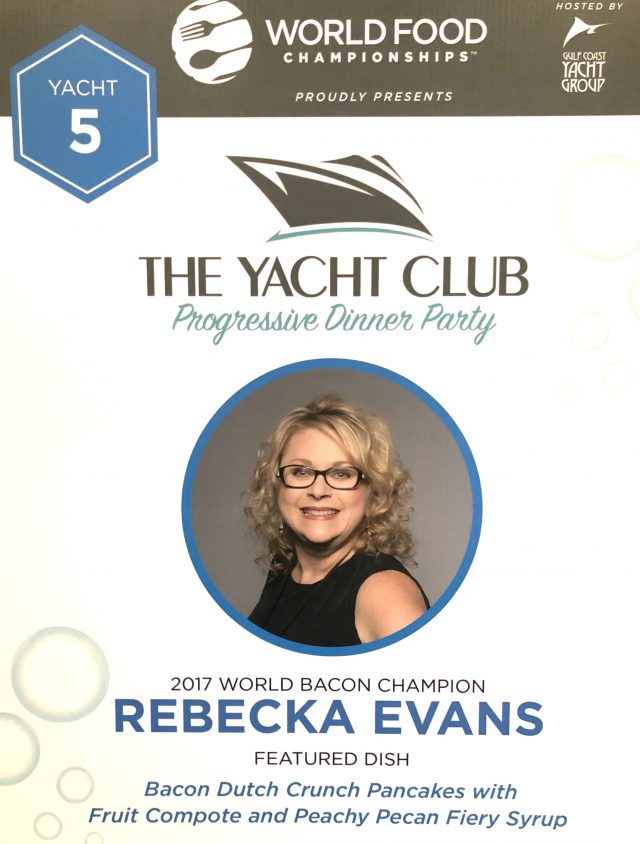 The Joy of Food Sport:

I love competitive cooking and sharing my love of Food Sport with others. World Food Championship 2018 was filled with non-stop action and a whirlwind of excitement. As the returning Bacon World Champion I was faced with the competition of a lifetime, and not to mention, a few added adventures.  I arrived in Orange Beach, Alabama November 5, 2018, after a 10-hour drive from my hometown of Houston, Texas. My first round of competition in the Bacon Category was at 9 AM, November 8, 2018. Thankfully, I finished 4th and went on to compete in the Bacon Top Ten on November 10, 2018. To read more about my contesting experience at WFC 2018 and the results from the competition  Click Here  (WFC 2018 Recap - Part 1)

I was invited to host a tasting demo at The World Food Championships - Yacht Club Progressive Dinner Party.  I also had the pleasure of competing in the Second Annual Grand Throwdown on Sunday, November 11, 2018. Between shopping and prepping for my regular competition days plus the two other events, I was one busy food sports competitor. Thankfully, I had my awesome team members there to help with shopping, prep, organization, and emotional support. Lisa Keys and Blake Evans, you both rock!

I had a blast at the second annual WFC Yacht Club Progressive Dinner Party. Thankfully, my friend and WFC 2018 sous chef Lisa Keys were there to help as we served 65 people in groups of 8-10 every 15 minutes. Did I mention we finished competing in the Top Ten Bacon showdown just 1 hour before our yacht club demo started? We had just enough time to freshen up then go set up for the event. Food sport is crazy fun!

Back by popular demand, WFC presents a progressive dinner on million-dollar yachts that will satisfy the most demanding taste buds! This culinary voyage includes award-winning recipes and samples from five of WFC’s past champions. Their combined winnings? More than $100,000! But YOU can taste all five dishes at a fraction of the cost! So jump aboard! Tickets are extremely limited but worth every penny! Sat, November 10, 2018 4:00 PM – 6:00 PM CST The Wharf Marina Orange Beach, AL 36561 (The event was SOLD OUT several weeks before WFC 2018) Source: World Food Championships

Chef Chad Combs, Ambassador Coordinator for the event, mixed up some delicious libations to pair with each of the five featured World Food Champions' award-winning recipes. He made a Spicy Peach Bellini to pair with my 2017 award-winning recipe Bacon Dutch Baby Pancakes with Peachy Pecan Fiery Syrup. It was delicious and served as the perfect paired drink for my dish. Thanks, Chad!

Posing For Photos On a Million Dollar Yacht:

Lisa and I had so much fun posing for pictures on the beautiful yacht and chatting with all the guests that attended the evening's festivities. I was able to share stories and answer questions about my food sports journey as Lisa and I served my 10K winning recipe. I even sang some opera for the last group of guests.

Thank you, Mike McCloud, World Food Championship, MMA Creative and WFC Staff, Chef Chad Combs, Walmart, and all the other amazing WFC Sponsors. The Yacht Club Progressive Dinner Party was the highlight of my 2018 WFC week.

After a long week of competing and hosting the Yacht Club demo, my friend and sous chef Lisa Keys were faced with a totally different kind of challenge, competing against each other in the WFC Second Annual "Grand" Throwdown. Stay Tuned next week to see who takes home the "Grand" Prize in WFC Recap - Part 3; you don't want to miss this one!