Grandmas know how to cook! I can finally announce my Food Network debut! Ta DA!  That's right, this happy grandma is being featured as a contestant on the Food Network's new Holiday series, Clash of The Grandmas! 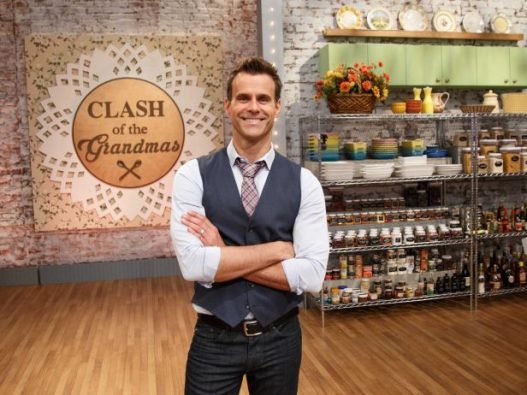 The talented Cameron Mathison is our host and is one of the nicest people I've ever met. I hope you'll set your DVR's to record the series and tune-in to my episode; Clash of the Grandmas "Home Sweet Grandma" which Premieres Sunday, November 20th at 10pm EST.  Please check with your local cable listings for times in your area.

I wasn't aware that two of my sweet friends and fellow food competitors were also on the show. You see, we're all sworn to secrecy during the process of selection and filming, so none of us knew the others were on the series until the official Food Network press release came out today. What a lovely surprise to see their names in the list below. Boy, us grannies can really keep a secret!!

Invite your friend over for a viewing party and tune in to see my Food Network debut... and to see who wins their episode!

"Nothing says the holidays like grandma's cooking, and these grannies are taking classic dishes to a new level," said Didi O'Hearn, Senior Vice President Programming, Food Network & Cooking Channel. "In this competition, age is only a number!"

Episodes are:
Clash of the Grandmas "Thanksgiving at Grandma's" Premieres Sunday, November 13th at 10pm
In an epic Thanksgiving throwdown, four grandmas are out to prove they've got game. First, they must dress up traditional stuffing ingredients to make a side dish that is anything but stuffing. In their second clash, the grannies have to transform Thanksgiving leftovers into a tempting Italian dish. Finally, its grandmas gone trendy as the remaining two contestants vie for the $10,000 prize by making their best Thanksgiving pie -- on a stick!
Competitors: Noemi Adbessian (Glendale, California), Janice "Boo" Macomber (Abbeville, Louisiana), Tanya Marshall (Indianapolis, Indiana), Sherri Williams (Crestview, Florida)
Judges: Monti Carlo, Nancy Fuller, Eddie Jackson

Clash of the Grandmas "Christmas at Grandma's" Premieres Sunday, December 4th at 10pm
These four grandmas are definitely not taking a holiday from the kitchen! First, Santa gives them his food hack favorite, a clothes iron, which they must use in the preparation of holiday appetizers. Next, the grannies must make a Christmas main course featuring at least one fresh, one frozen and one canned ingredient. Then, the final two grandmas have to turn old-fashioned fruitcake ingredients into a holiday dessert irresistible enough to earn one of them $10,000 and impress the judges.
Competitors: Lesa Nelms (Sarasota, Florida), Rachelle Nichols (Millbrae, California), Guenevere Reed (Powder Springs, Georgia), Maria Silva (Prospect, Connecticut)
Judges: Monti Carlo, Nancy Fuller, Eddie Jackson

Clash of the Grandmas "Grandma's World Tour" Premieres Sunday, December 18th at 10pm
Four globe-trotting grandmas take off on a culinary world tour! First, they have to make pizza the Belgian way, using a waffle iron as their only baking source. Next, it's "aloha-ole!" as the grannies make a mash-up of Hawaiian and Mexican cuisines. Then, the final two grandmas go tropical as they turn the ingredients from a frozen daiquiri into a dessert that will earn them $10,000.
Competitors: Karen Darensburg (Albuquerque, New Mexico), Claudine Marshall (Agoura Hills, California), Ally Phillips (Murrell Inlet, California), Genevieve Vang (Detroit, Michigan)
Judges: Sharone Hackman, Aarti Sequiera, Jake Smollett

Viewers can catch highlights of the grandma's battles at FoodNetwork.com and join the conversation on social media using #ClashoftheGrandmas.

Clash of the Grandmas is produced by Triage Entertainment.

FOOD NETWORK (www.foodnetwork.com) is a unique lifestyle network, website and magazine that connects viewers to the power and joy of food. The network strives to be viewers' best friend in food and is committed to leading by teaching, inspiring, empowering and entertaining through its talent and expertise. Food Network is distributed to more than 100 million U.S. households and up to 35 million unique web users monthly. Since launching in 2009, Food Network Magazine's rate base has grown 13 times and is now the third largest monthly magazine on the newsstand, with over 12.4 million readers. Headquartered in New York, Food Network has a growing international presence with programming in more than 150 countries, including 24-hour networks in the United Kingdom, Asia, and the Europe, Middle East and Africa (EMEA) region. Scripps Networks Interactive (NASDAQ: SNI), which also owns and operates Cooking Channel (www.cookingchanneltv.com), HGTV (www.hgtv.com), DIY Network (www.diynetwork.com), Travel Channel (www.travelchannel.com) and Great American Country (www.gactv.com), is the manager and general partner