I've tried to re-create the Butter Chess Pie recipe from Furr's Cafeteria for years!  I've come close but never met the standard for the creamy, rich flavor of the original recipe.

Furr's recipe is the perfect slice of heaven; gooey yet creamy, and just the right amount of sweetness to balance the custard texture.
I've tried hundreds of recipes over the years, making two new versions this week.  Both recipes boasted their incredible likeness to the Furr's recipe but they both ended up in the trash! One pie was literally in the oven for two and a half hours and never set up. Nasty!
This is my third recipe this week, tasty but not the real deal!
I recently learned that Furr's will not divulge the recipe come hell or high water!  So if one of my fellow food bloggers knows the "real" recipe for this luscious dessert please feel free to share! 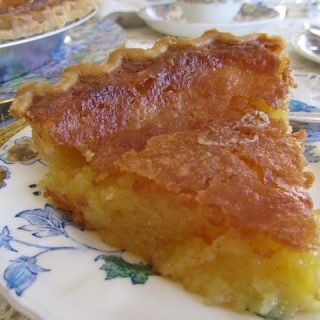 Tried this recipe?Mention @athomewithrebecka or tag #athomewithrebecka!
The Furr's recipe has a cool yellow crust. Mine always end up with this crunchy brown top. I've tried covering the pie with foil but still no luck.  Despite the crusty top this recipe was pretty good.  I'm still hoping to find the secret recipe for the Furr's pie.  Until then, I'll continue to post my valiant efforts in the quest to find the perfect Butter Chess Pie recipe.
« Ham and Bean Stew
Matzoh Ball Soup »