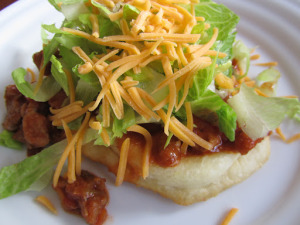 Navajo Tacos and Green Chile Stew
I'm all about food memories!  The kind of memories that evoke a moment in time through just one bite of a remembered dish.  In the instant the food touches your taste buds, your mind flashes back to that special moment in time.  Memories flood your mind, some in a good ways, others maybe not so much.
This story leads to one of my most happy food memories.
When I was in Elementary school my older brother began dating an American Indian girl. After a few months of dating, our families got to know each other and soon became very close friends.  As a result, my family became involved with the Lone Feather Indian Counsel in Colorado Springs, CO.  Our involvement began by going to monthly meetings where our parents helped with media promotions, fundraising for the Indian College Fund and event planning.  The Council sold Navajo Tacos, Chile and Posole to raise money for the College Fund, at mini Pow Wows throughout the year, culminating in an extravagant Pow Wow in the summer.  American Indians from around the Country would travel to Colorado to compete for cash prizes and to see the crowning of the years newest Indian Princess.
The Lone Feather Indian Counsel was made up of American Indians from Colorado, Taos New Mexico, Oklahoma, and Nebraska however, other regions were represented. My father is one quarter Cree Indian, which makes me one eighth Cree, however, you wouldn't know it to look at me with my light colored skin and blue eyes.

Photos were taken during a mini Pow Wow in Manitou Springs, Colorado, 1971

At the end of the meetings, the Elder drummers would play and sing traditional music while the families gathered to dance. The women would wrap hand made shawls around their shoulders and the men would don traditional headdress; merging in a cacophony of movement and joy. It was a truly cultural experience to be a part of the organization and see "real" American Indians, living life and learning to understand the American Indian culture in such a personal way.  All of us, living normal everyday lives in normal everyday homes but experiencing traditions long past.
As time past, I began to discern the different melodies of each song and learn the history of their long sung stories. The rhythmic beat of the drums and the strong clear voices of the elders, remain in my mind to this day.  Intertwined, with the smell of Indian Fry Bread, piping hot Pasole, fancy dancers pounding the floor, and the anticipation building at who would become the next Indian Princess...all moments I can remember as if it were yesterday.

Frybread has a significant role in Native American cultures. It is often served both at home and at gatherings. The way it is served varies from region to region and different tribes have different recipes. It can be found in its many ways at state fairs and pow wows, but what is served to the paying public may be different than what is served in private homes and in the context of tribal family relations. Source Wikipedia

Rebecka Evans
This Fry Bread recipe comes from a close family friend, Ann Fineran, a Pine Ridge Sioux, from South Dakota. She was the last of her linage.
No ratings yet
Print Recipe