Valentine's Day is fast approaching, making this month a sweethearts delight. Recipes and gifts for 'all things chocolate will plague markets, television shows and cooking web sites, tempting us to indulge to our hearts content.

Chocolate has long been linked to Valentine's Day for it's rumored aphrodisiac qualities, not to mention it tastes damn good! So where did the idea of giving chocolates on Valentine's Day come from? From the moment chocolate was discovered!

This scrumptious dessert has been entered in Cooking with Nona Valentine Chocolate Dessert Contest. Click here for more details and to visit the contest photo gallery.

The history of chocolate begins in Mesoamerica. Chocolate, the fermented, roasted, and ground beans of the Theobroma cacao, can be traced to the Mokaya and other pre-Olmec people, with evidence of cacao beverages dating back to 1900 BCE.
Chocolate played a special role in both Maya and Aztec royal and religious events. Priests presented cacao seeds as offerings to the gods and served chocolate drinks during sacred ceremonies. All of the areas that were conquered by the Aztecs that grew cacao beans were ordered to pay them as a tax, or as the Aztecs called it, a "tribute".
The Europeans sweetened and fattened it by adding refined sugar and milk, two ingredients unknown to the Mexicans.

Cassata is one of the world's first cheesecakes

A classic Sicilian cake, rumored to be linked to the island's Arab period because of the candied fruit mixed into the ricotta cream, among other things, it's actually much older: The word Cassata derives from the Latin Caseus, which means cheese. In other words, Cassata is one of the world's first cheesecakes.

Cassata is a traditional sweet from the province of Palermo, Sicily (Italy). It is similar to the French gateau. The word ”Cassata” comes from Arabic gashatah (cf. Latin caseata, anything made of cheese) and was first introduced during the Arab rule in Sicily from the 9th to the 11th century. 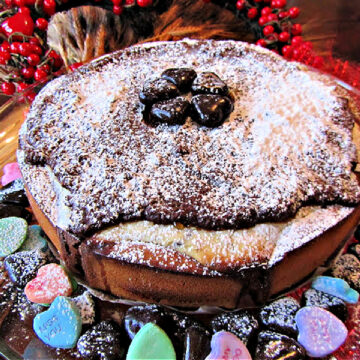 FOR THE CAKE FILLING

FOR THE CAKE FILLING

A perfect Valentine's Day dessert for your special someone! Filled with rich decadent flavors, this creamy, chocolaty treat will set the mood for a night filled with desire.