Home » What to do with a whole mess of fresh veggies and a lump of grey meat?? 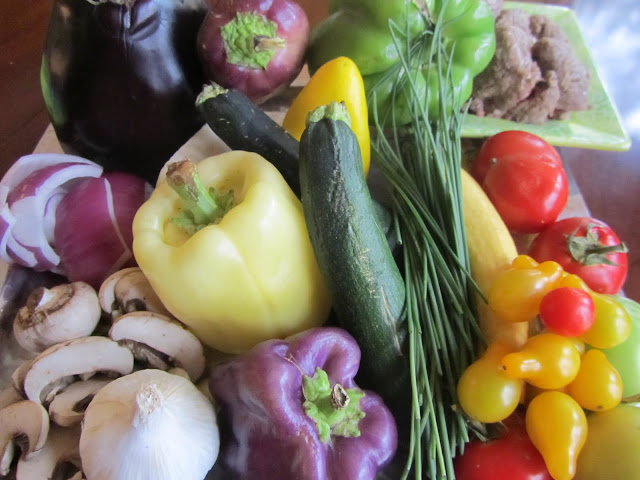 Over the past few weeks I've been collecting a beautiful bounty of fresh harvest vegetables.  Today I noticed a few varieties were looking a little peaked, so I decided I'd better put them to use before they were past their prime. While foraging through my fridge for leftover veggies I noticed a poor lump of grey ground beef  hiding behind the creamer.  After close examination, I decided the meat was well within the safety limits for consumption.

My original plan was to make Ratatouille but with the addition of meat the recipe morphed into a thick rich sauce.

I served the sauce over spaghetti in hopes of throwing the family off the "vegetable scent". I would have never guessed that my son would say, "Mom, I hope you wrote down this recipe because it's now in the top 10 of my new favorite meals!"

My thirteen year old son doesn't eat many vegetables (he's a lot like his daddy) but he ate this like it was candy!   After hearing his praise I wasn't about to confess to him that he had just eaten three of his least favorite vegetables...squash, zucchini and eggplant!

Add 1 teaspoon olive oil for each additional batch of vegetables and season with salt and pepper while you continue sauteing them separately in this order, eggplant, squash, onions, peppers.

In a medium skillet cook ground beef until browned, season with salt and pepper, remove any grease from meat the add meat to stock pot

stir in garlic salt, basil and pepper to taste

Cook sauce covered for 45 minutes to 1 hour.  Serve over noodles or with mashed potatoes. 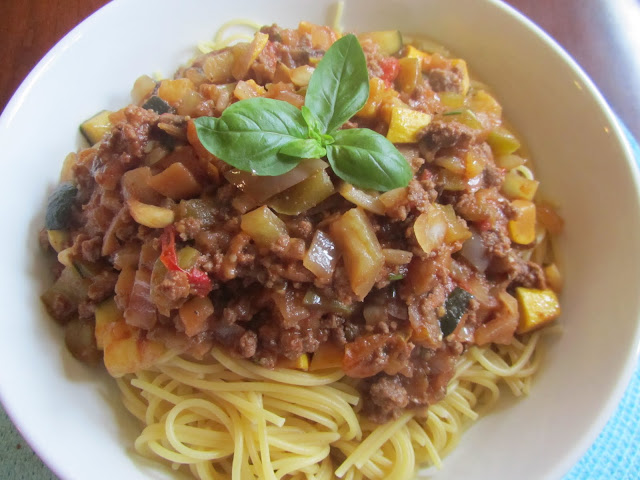 I made such a big batch that we ended up with a large container of leftover sauce. I rarely eat leftovers, so I surprised myself when I ate some of the sauce for breakfast the next day.  A few hours later I spread some between two slices of buttered toast, making a sandwich reminiscent of the Sloppy Joe. However, this sandwich was so much more delicious. Later in the afternoon, my son finished what was left of the sauce as his after school snack.