Bacon shrimp spiral dumplings were my entry into the structured build round of the Bacon World Food Championships. The recipe proved to be a success! 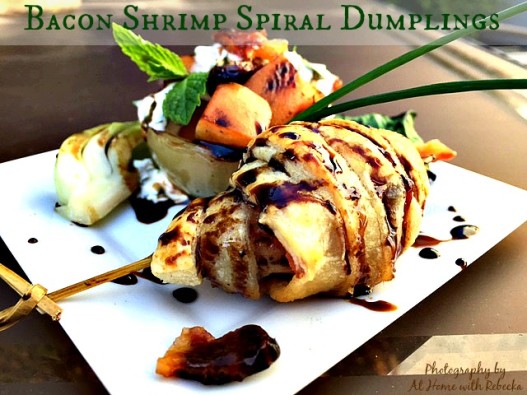 As part of the OPENING ROUND of competition, competitors are asks to create a Structured Build for the Bacon World Championships; this year the build was a “Dumpling”. The Structured Build creates an even footing, or structure, within which all competitors must create.

"The competitors who set themselves apart from the field will have proven their culinary skills. Competitors will be required to use Wright Brand Bacon in their Structured Build. Everyone was required to make  a Dumpling using their own ingenuity and Wright Brand Bacon, the official sponsors for #WFC2015 Bacon Category."  Source: WFC 2015 Handbook

"As defined, Dumplings consist of small pieces of dough wrapped around a filling. They can be based on flour, potatoes or bread, and may include meat, fish, vegetables, or sweets. Dumplings may be cooked by boiling, steaming, simmering, and/or frying."

I found the dumpling build to be the most difficult recipe to create for the competition. I began by making traditional Asian dumplings accompanied by broth; they were super tasty, but executing the perfect dumpling wrapper proved to be very challenging. After a lot of trial and error, I eventually created 8 different Asian dumplings recipes. I also created 3 bacon apple dumpling recipes as well as, 2 chicken and dumpling recipes. Unfortunately, I didn't feel that any of the recipes would take me to the Top Ten in my category!

I finally came up with a recipe utilizing some of my favorite flavors from the South; Bacon Shrimp Spiral Dumplings with Cheesy Peas and Bacon Salad.

This recipe captured all the goodness of Southern comfort food with a few twists and turns. Applewood smoked, apricot candy bacon, wrapped around jumbo shrimp and dressed with a spiral of puff pastry, to form a dumpling with layers of tasty flavor. The crisp, spiral pastry, and sweet-savory bacon, combine beautifully with the succulent shrimp, to create the perfect bite. The tasty dumpling rested on a side dish of cheesy, green peas and bacon, to facilitate the perfectly balanced meal. The final touch, a sweet apricot Jezebel sauce brings sweet-heat, with a drizzle of balsamic reduction to add rich acidity. Folks...I think we have a winner. 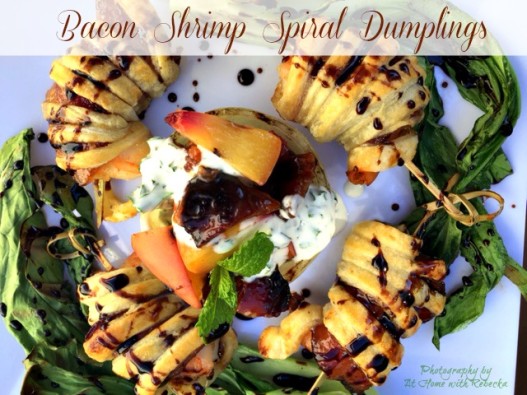 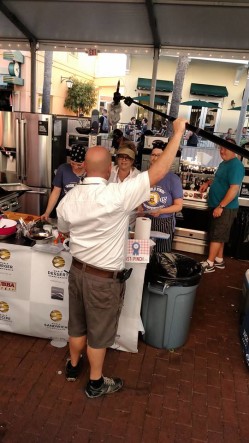 My Sous Team: Kim and Mark Banick and Kasey Brown 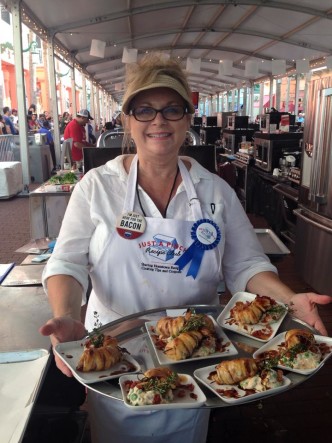 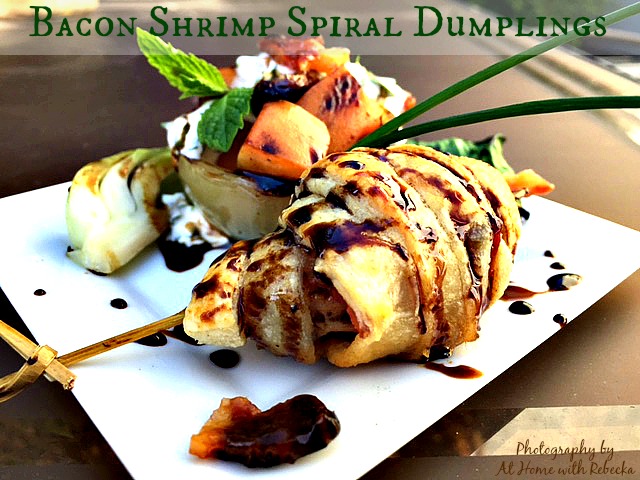 For the Dipping Sauce

For the Balsamic Reduction

For the Apricot Bacon

For The Shrimp Dumplings

For the Creamy Cheesy Peas and Bacon

To Plate:
Drizzle with balsamic reduction
Serve with Apricot dipping Sauce
Tried this recipe?Mention @athomewithrebecka or tag #athomewithrebecka!
The combination of flavors and appearance of the dish, combined with my scores from my Signature Build Dutch Apple Baby with Blackberry Hoisin Bacon placed me 8th in the Top Ten Bacon Category. As a Top Ten Finalist, I had to bring another winning recipe to the Infused Round, for a chance to win 10K as the First Place winner. Stay tuned for my final WFC 2015 post and my 4th Place Winning Dish recipe.

EAT Method is the criteria our judges will be instructed to follow as they score each of your entries. It is smart to understand what they are being asked to do as you consider your Execution, Appearance and Taste!

The EAT Method is the World Food Championships’ own proprietary scoring system and methodology that allows any WFC competition category to be judged on the same criteria in a consistent manner. Each entry will be judged on three key evaluation criteria: Execution, Appearance and Taste.

EXECUTION: Within a category, “Execution” may be defined specifically to the category it belongs in. However, in general, Execution will be evaluated by overall and specific judge’s interpretations of dish structure, edibility, potential featured ingredients, category specifications, design and preparation.

APPEARANCE: Within a category, “Appearance” may be defined specifically to the category it belongs in. However, in general, Appearance will be evaluated on two criteria: the product to be sampled which is presented for judging, as well as the overall appearance of the turn-in tray. EAT judges will be instructed to more heavily weight their assessment based on the product itself, but to also consider overall presentation appearance.

TASTE: Within a category, “Taste” may be defined specifically to the category it belongs in.
During WFC Judging each criteria will be judged on a scale of 1 (inedible) to 10 (perfect), with 5 being a mid-point (average) score.

Each of the EAT category scores will be weighted according to their importance to the overall dish. The weighting is as follows: Taste – 50%, Execution – 35%, Appearance – 15%. 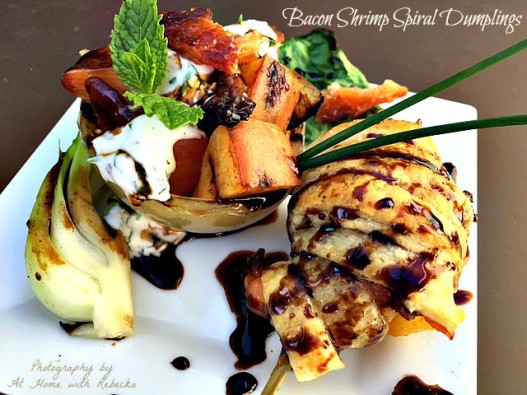