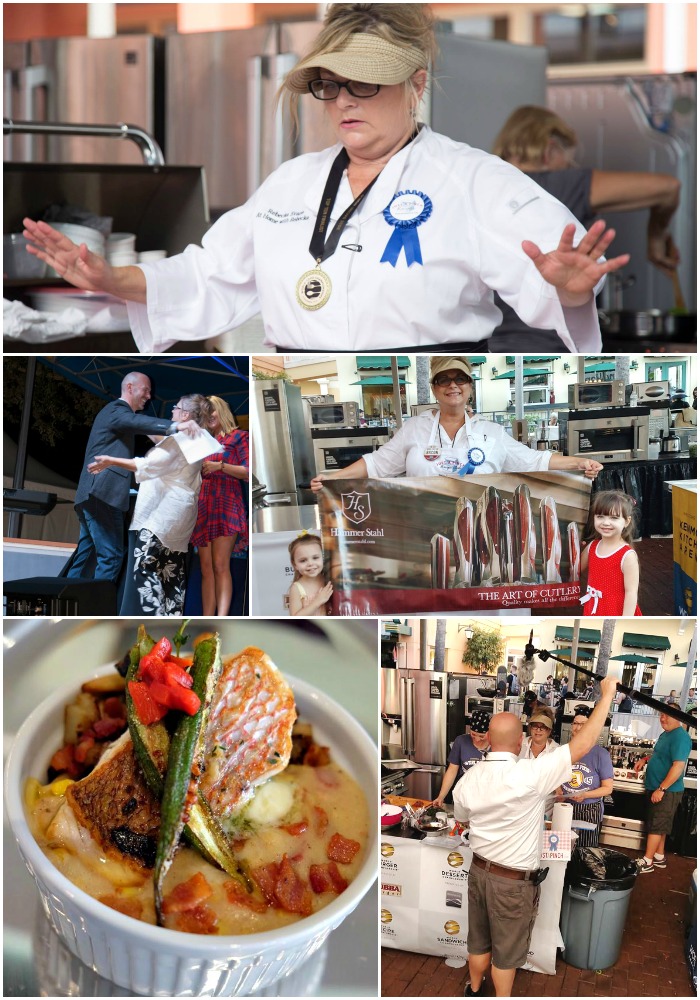 Getting in the "Zone" and making Bacon history at the 2015 World Food Championships in Kissimmee FL!

To enter the Super Bowl of Food Sport is not for the faint of heart; it requires serious skill in the kitchen and a deep desire to WIN! From start to finish, WFC is a marathon food sporting event, and like any athlete in training...conditioning starts months before stepping onto the field. Even with mad cooking skills there is no  guarantee for entry into such a prestigious cooking competition. In the effort to gain entry, competitors must qualifying with a winning recipe by earning a highly coveted Golden Ticket!

I had the honor of qualifying by winning not 1...but 2 Golden Tickets, in online competitions. The first winning qualifier was Penobscot McCrum #TaterTalent Recipe Contest. My Sweet & Savory Clam-Baked, Twice Baked Potato with Apricot Jezebel, got me a Golden Ticket and qualified me for the Seafood Category.

However, as First Runner-Up, fees and expenses are not paid by the sponsor. That honor goes to the First Place Winner, which happened to be my friend and food competitor, Adam Feinberg, owner of Feintasting Foods! 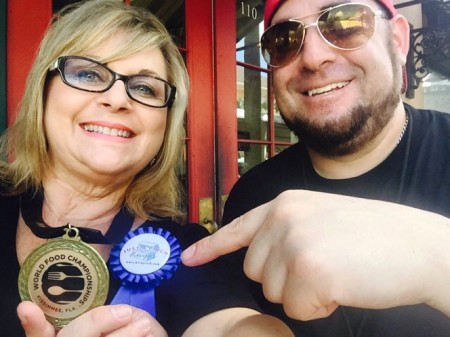 Rebecka Evans & Adam Feinberg WFC 2015 Celebrating my BACON Top Ten Win!!  I love that like-minded people from around the World can come together, and be a part of a competition where your competitors are also your friends and biggest cheerleaders! Some people get a little cranky when it comes to winning but for the most part, foodie friends are friends for life! 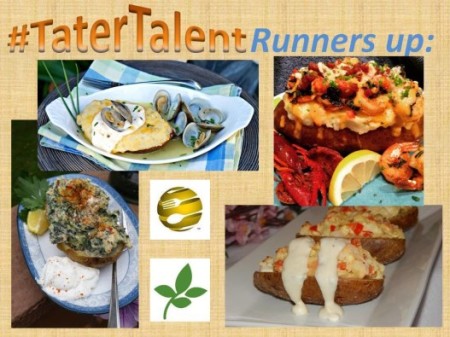 My second Golden Ticket and cash prize of $200.00 for WFC entry fees, came from Just A Pinch® online community. Janet Tharp and her Kitchen Crew picked my Dutch Apple Baby with Blackberry Hoisin Bacon recipe, as a Blue Ribbon winner to represent their company in the Bacon Category. I presented the winning recipe at WFC 2015 as my Signature dish and received 91.75%, placing me in Bacon Top Ten Round. 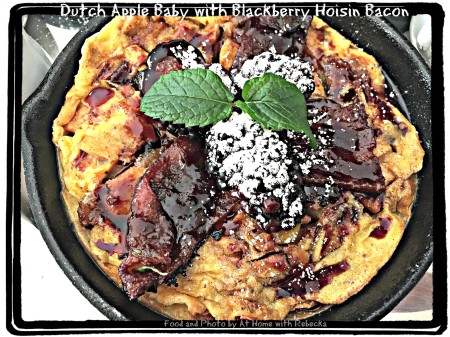 Once the Food Competitor has received a Golden Ticket, endorsements, sponsorship and support from brands are in order. I was so proud to be sponsored by Hammer Stahl Cutlery with a set of glorious chefs knives, backpack, and knife case. The Boning Knife was my saving grace when it came to deboning the beautiful American Red Snapper, for my Top Ten Round, Infused Bacon Recipe. The exceptional quality and workmanship of the blade was like cutting with a laser beam; sliding through the fishes flesh like butter. 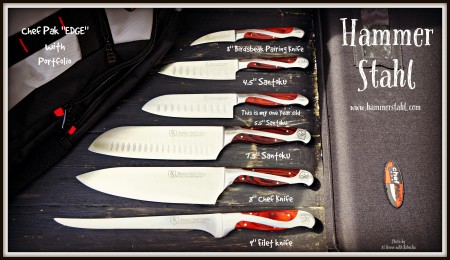 The next step for me was to find a "Team" of qualified sous chefs to support me in Kenmore Kitchen Arena. God had a plan!! As a first timer to WFC, I had no idea who, how, what, where and when. I did, however, have an online support group of friends in the food competitor community.  Kim Banick, food competitor an award-winning home cook, owner of The Prize of Cooking, and seasoned World Food Champion, offered to be my sous chef for the opening round. She reached out to me without knowing anything about me except through social media groups.  God knew I needed help competing in such a prestigious event for the very first time. Kim shared her wisdom as a competitive cook as well as, her sweet spirit and gracious attitude. She also, brought with her a team of sous, Mark Banick and Kasey Brown. We cooked together, we prayed together, and we took TOP TEN in the Bacon Category!

Kim and her team were also competitors at #WFC2015 in the Chili Category and scheduled to compete the next day during my Top Ten Round....I had to find another sous, and fast! Enter my little dynamite, Kc Quaretti, owner of Chat 'n Dish and food competitor in the Dessert Category the day before. KC graciously accepted my plea for help and became my sous for Top Ten Bacon Round. Kasey Brown from the Banick team also showed up to help while the Chili-Heads were in a holding pattern.

With help from my friends and family, #WFC2015 Game Day found me and my team, belly deep in fish scales and up to our eyeballs in the most delicious BACON in the World, Wright Brand Bacon.  My two sous, KC and Kasey lifted me up both physically and spiritually as we churned out one of the the best tasting recipes I've ever created; I couldn't have asked for a better team or winning result.  For a first time competitor, 4th place in the World is pretty darn respectable!

Below you'll find a video produced by Wright Brand Bacon featuring a few of my bacon competitors and me, the list of Top Ten WFC 2015 Official Scores, and my winning recipe for American Red Snapper Bacon Mushroom Hash and Parsnip Porridge. 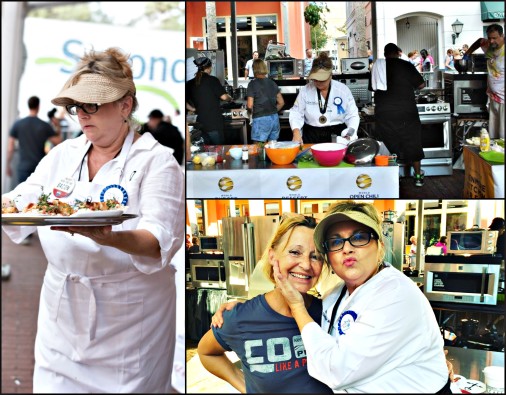 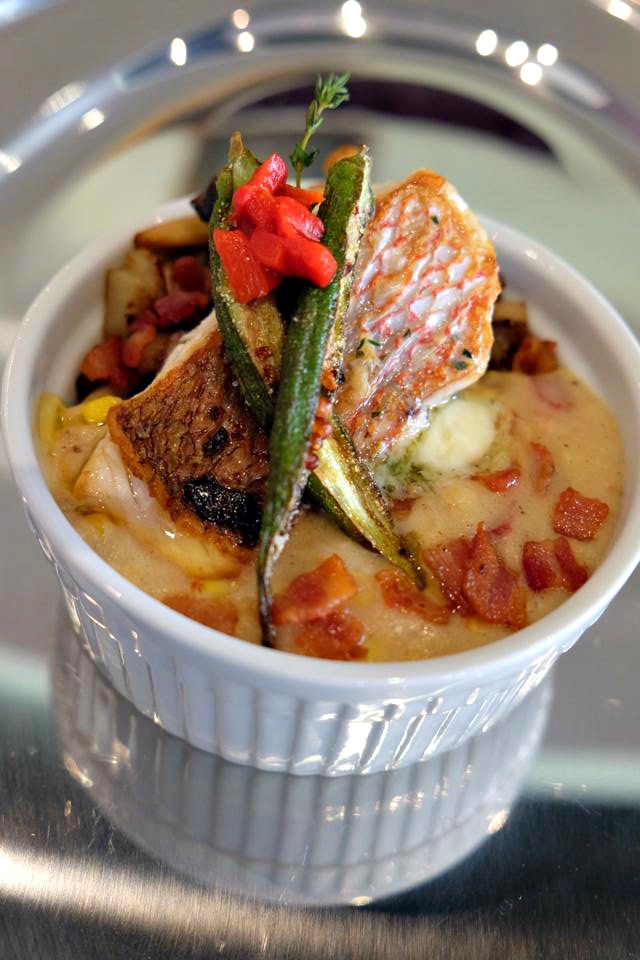 Rebecka Evans
Perfectly cooked American Red Snapper, accompanied by a crisp mushroom hash, in a creamy bacon parsnip porridge; makes for the perfect bite of comfort food. The woody favors of the crispy sautéed mushrooms are the perfect crunch paired with the creamy parsnip bacon broth. American Red Snapper is cooked to perfection with just a hint of salt and served with a thyme and lemon compound butter. My recipe placed me 4th in the Top Ten of World Food Championships 2015 Bacon Category.
No ratings yet
Print Recipe Pin Recipe
Prep Time 20 mins
Cook Time 25 mins
Total Time 45 mins
Servings 4

For the American Red Snapper

For the American Red Snapper

For the Bacon Corn Porridge

For the Bacon Mushroom Potato Hash 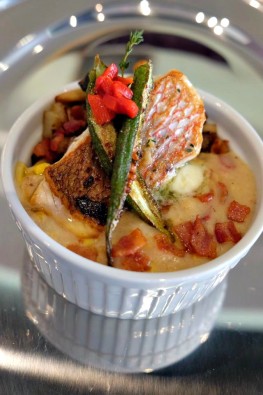