I was chosen to host Chef demos for the Walmart Community Table Program in Dallas, Texas Nov. 8-10, 2019. I was welcomed with open arms by the Walmart Neighborhood Market staff and associates located at 1501 Buckingham Rd, Richardson, TX 75081. Thank you for hosting me, it was an honor.

This amazing new program is a celebration of how food brings families and communities together, and an invitation for you to join the campaign by submitting your family recipes and stories using #WalmartCommunityTable.

In keeping with the Walmart Community Table Program, I'd like to share the story behind my Ten Thousand Dollar 2017 Bacon World Championship dish, and the recipe for my first incarnation: Dutch Apple Baby Pancakes with Blackberry Hoisin Bacon.

I was so ready to compete and armed with three new recipes for the Seafood Category when I learned that I had won a second Golden Ticket for the Bacon Category (click Just A Pinch - Bacon Recipe Challenge with my Dutch Apple Baby with Blackberry Hoisin Bacon to see more on this dish).

The WFC Rules state you can only compete in one category, so I was faced with choosing between Seafood and Bacon. I thought it would be difficult to decide since I had already created and practiced three seafood recipes. However, the idea of cooking savory, smoked bacon dishes as opposed to seafood recipes was too hard to pass up.

A couple days later I received a message from my Facebook foodie friend, Kim Banick. Kim graciously offered to be my sous chef and we finished in the Top Ten my very first year. Thankfully, I had worked on several seafood recipes because that year's Bacon Top Ten Round infused ingredient was fresh whole snapper (click American Red Snapper Bacon Mushroom Hash and Bacon Parsnip Porridge to see that year's Top Ten Round dish).

The flavors in my initial three recipes at WFC served me well, as did Kim Banick's help in WFC Kitchen Arena. I placed Fourth in WFC 2015 with my bacon infused dishes.

That year sparked the flame of my Food Sport Journey, and is a fire that has continued over the past five years; ultimately leading to a win in the 2017 Bacon World Championships (see BACON DUTCH CRUNCH PANCAKES with Peachy, Pecan, Spiced Syrup for more information).

That very same year, my dear friend Kim Banick won First Place in the Seafood Category. You should have seen us as we jumped on the bed in our condo with our giant 10K checks.

Traditional Dutch Baby Pancakes are regularly served with fresh lemons and a generous dusting of powdered sugar. However, they are the perfect base for a myriad of fruits, sauces and even savory toppings. I followed my instincts and favorite flavor profiles, as I combined sweet and savory flavors to create an award winning dish. As you can see in the gallery above, my recipe has undergone major transformations since it's early days in our home.

The community involved in the making of my award winning recipe is innumerable, and the family and friends involved in it's metamorphosis are priceless. Its crazy how one decision and one recipe can touch the lives of so many people.

I hope you enjoy Dutch Apple Baby with Blackberry Hoisin Bacon recipe as much as my family and friends have over the years! 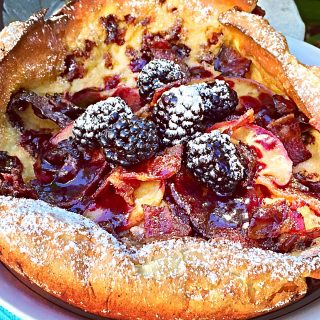